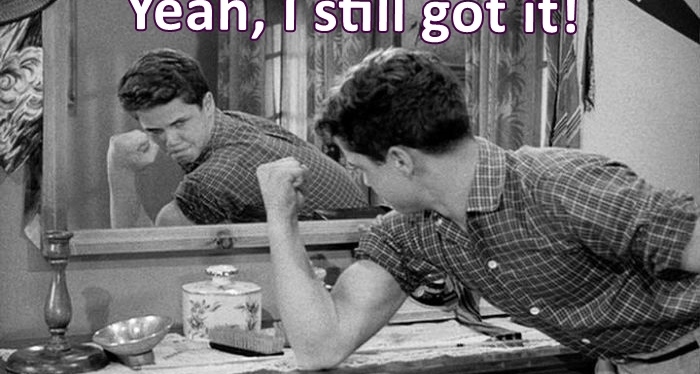 Several positive items to report in my renewed quest for fitness since the discovery that I had a heart attack sometime in the past (likely, in my mind at least, in January of 2017).

Mental Health: first and foremost, my mood has improved considerably. Thanks to cardio rehab and the natural adaptation process that we all go through after experiencing major life events I’m happier than I’ve been in a while and am functioning again. At least in my opinion (my friends and co-workers may continue to disagree but that’s their problem). I am looking forward to the future for the most part again and not afraid that each day will be my last – even if it turns out to be.

Physical Health and Exercise: cardio rehab goes well and I’m making progress. I’m biking and walking like I should on days I don’t have rehab – even beating several other “steppers” in my weekly Fitbit step challenge – which I wasn’t doing for a long time. I get through my tap dancing each week without feeling like I’m going to pass out and I’m in general feeling more energetic.

More exciting is that my bodyfat percentage has been on a downward trend for about four weeks now even though my body weight has increased slightly. In bodybuilding this would be known as “making gains.” Not by huge amounts, after all I’m not a newbie or a teenager anymore, but a clear trend. It does mean that I’m not losing fat as is actual goal, but it means that I’m gaining more muscle than fat which isn’t bad either. Especially for someone who is in late middle-age (unless I live to be 130).

Last month I mentioned I was being tested for asthma and the good news is that my lungs are “normal” and have no obstructions. Something is still going on with my breathing though and my gastroenterologist has put me on iron thinking that my anemia could be contributing to the issue.

I do have sleep apnea, both obstructive and central, for which I’ll be getting a CPAP machine for this coming week (I hope). I have one more night of testing with various devices to see which will work best for me.

Crohn’s: speaking of gastroenterology, we’ve decided that my Humira may not be doing the best job for me. So we are switching things up and I’m going to Entyvio. The plus side of this is that I only get an infusion every 8 weeks (at home) instead of a weekly injection. I’ll be blogging more on this as treatments begin.

Nutrition: here’s the hard part. I’ve discovered something that I probably should have known all along. Sugar is bad for you. At least added sugar is. And like sodium, the stuff is everywhere. According to the American Heart Association men should restrict their added sugar levels to just 9 teaspoons a day (4 grams = 1 teaspoon) and women only 6 teaspoons. This means that if you have one 12 ounce can of pop a day, non-diet variety,  you’ve gone over your limit. Not to mention the mega servings most of us consume! I drink the diet stuff so that’s not a source of sugar for me, but my sweet tooth may literally be the death of me. Especially when you consider that sugar has inflammatory properties – which can aggravate my Crohn’s, which may have caused my heart attack in the first place!

Overall: I’m doing as well as can be expected and maybe a little better even. I thank God for each day I’m given and that I’m not worse off.

It’s an old saying but true: it could be worse. Oh well, it’s back to the grocery store I go!